CoVid19 flier to all Ships visiting the Solent

I am a resident of the Isle of Wight and I have been working with SCFS in Portsmouth since 2006. Prior to this I was a teacher of Religious Studies and French. But the increasing stress of teaching and a desire to spread the Lord’s Word, plus love of all things shipping (and a large measure of Divine guidance) brought me to this wonderful Society, working alongside my friend and colleague, Peter Wells.

I see myself as a ‘Christian Friend to seafarers’ so my role is to befriend those I meet and present the Good News of the Gospel with them, if the opportunity is right and when they wish to listen. Someone asked me recently, “Which comes first - befriending the seafarers, or informing them?” Without doubt, for me the first step in carrying God’s Word is to befriend and build trust. I am the Lord’s hands, feet and mouth, a link in the chain that carries His message.

There is a strong supportive element to what my colleagues and I do in SCFS. Not so long ago, a mother wrote to me asking me to visit her son’s ship when it came into Portsmouth and check that he was ok, as she hadn’t heard from him in some time. I did so and finding the young man to be well, I told her so. Later she wrote to me again and asked me to give him a letter which she had enclosed. This I did and I watched her son open it in the ship’s canteen, only to dissolve in tears as he read his mother’s words of love.

Portsmouth handles over 75% of all the bananas that come into the UK and Europe. They are transported on 'reefers', a shipping term that refers to the refrigerated ships that move perishable commodities. Recent changes to shipping timetables, allied to my own preaching commitments, mean that I now serve more of a supporting role to Peter. However, many of the ships that I visit dock regularly in Portsmouth and it always brings me great joy to go onboard and meet my old friends among their crew members.

I am Peter Wells and I have been serving as a Port Missionary with Seamen’s Christian Friend Society in Portsmouth for over seven years. Throughout that time I have always found it to be a deeply rewarding and humbling role. I live on the Isle of Wight but thanks to the wonderful taxi service provided by my dear wife, I am able to take the regular Hovercraft service to Southsea, then travel on to Portsmouth to visit to ships as they call into port.

From isolation into friendship
I believe that my role as Port Missionary is to look after the spiritual and physical welfare of the seamen I meet to the best of my ability. Often this simply involves offering a hand of friendship and providing a listening ear. Seafaring can be a desperately lonely and isolating job and some of the men and women I meet tell me of the sense of isolation they endure, cut off from their family and friends for months on end. This loneliness can be especially pronounced for Christian crew members, as they miss the fellowship and sharing that forms such an important part of our faith. Sometimes I’ll take them shopping in Portsmouth or for trip over to the island. That said, there is no doubt that seafarers form a very tight-knit community. Recently I visited a ship where a member of the crew had died at sea. I was greatly touched by the depth of sadness shown by his 20 colleagues and their willingness to be comforted and challenged by the Word of God..

Welcome to the ‘Solent Team’
I am very capably supported by three other SCFS colleagues who together make up the ‘Solent Team’ and who help me to carry God’s Word to visiting seafarers. John Budd, who also lives on the island has been involved in visiting ships since 2006 and does a wonderful job of befriending those we meet and sharing the Good News of the Gospel with them. Chris Hanna used to be a skipper of the pilot launch, so he knows Portsmouth docks like the back of his hand, which is an enormous boon to us. And finally there is Pete Cook from Waterlooville on the mainland. Pete Cook has now retired from serving in the S.C.F.S. (see below)

The gift of communication
As I write this summary in 2019, we have recently been given a hand-held Wi-Fi unit, donated by the ITF (the International Transport Workers' Federation). This means that as soon as we bring it onboard, the crew is able to contact family members at home. We also receive a tremendous supply of gifts and knitted clothing from churches as well as from anonymous sources, all of which is much appreciated by the seafarers. We are also fortunate in having a good supply of Christian literature, all of which is avidly sought by the seafarers.

We really do value the prayers of those who support our work in both prayer and practicalities. Our desire is that we too, may leave something of the fragrance of Christ as we visit the ships each week.

Pete Cook has had a tremendous influence for good in the solent team. He has been such an encouragement to us all, regularly driving from Cowplain to Southsea Hoverport, picking up the Isle of Wight contingent and transporting us up to Portsmouth Commercial Docks. Not content with that, he also brings supplies of quality clothes donated by a couple in his church and has managed to climb the steep gangplanks until well into his eighties! It is therefore with some sadness that we have received his announcement of retirement, but we well understand his reasons and realise that his church would have to change down a gear without all his energy!

He joined John & Phil visiting ships in Portsmouth after meeting Phil at Cowplain Evangelical Church. Came to Christ late in life, one day after his Christian wife died of cancer. Has rapidly making up for lost time and kept us younger ones moving. He has four children, eleven grandchildren and five great-grandchildren, some of whom have come to Christ since they have seen such a change in their father / grandfather! Formerly he was an electronics engineer in the RAF and Quality Director of GEC. Joined SCFS Solent in 2009.

We wish him every blessing in his continued work at Cowplain Evangelical Church. 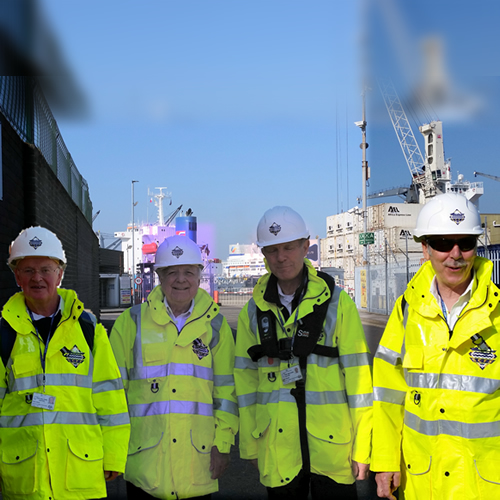 Seafarers Resources for Port of Portsmouth 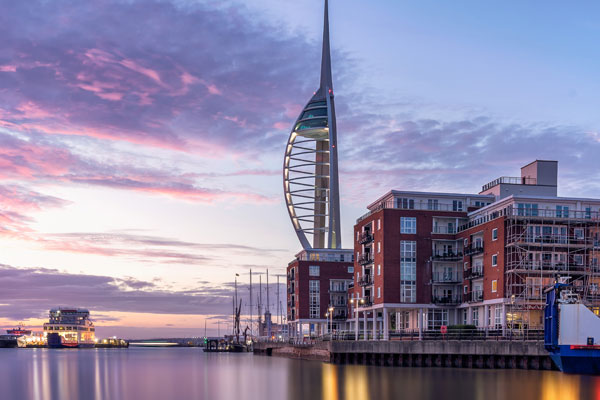 Our new regular online newsletter is out now!